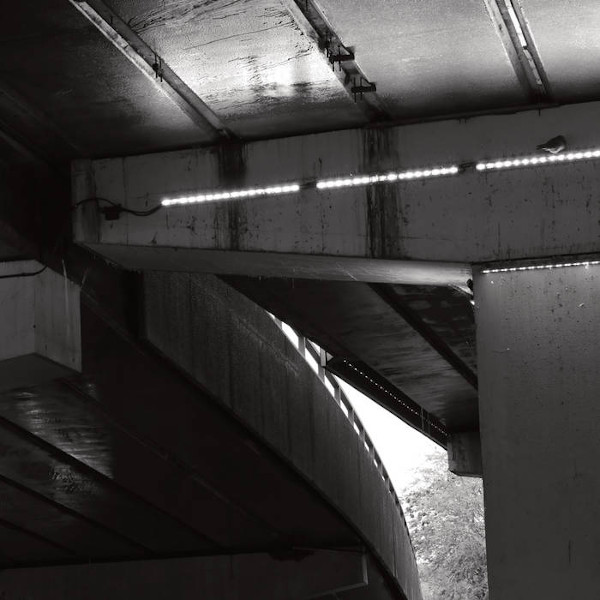 Contact microphones are the tools used by Michael Lightborne, positioned close to the concrete pylons supporting the Coventry Ring Road, the huge dual-carriageway flanking the hometown of Delia Derbyshire. The road was built between the 1950s and the 1970s and is nowadays held up as a classic example of failed urban planning, a barrier that has effectively prevented the expansion of the centre. The road, hated by pedestrians has sparked interventions since 1988 by the City Council to recreate the connections between the heart of the town and its surrounding areas. Now the process of disassembly, mitigation and reuse of the structure is underway and Lightborne, almost to emphasise the outcome, immediately grasped the “melancholy” aspect of the structure’s sounds, a modernist monument that recalls certain Ballardian dystopian settings. If the first track is a collage of field recordings from around the Ring Road, almost a catalog of the available sounds, the following tracks develop these audio samples in an even more poetic way. “Fortran”, for example, is captivating, disturbing and deep, a slow suck into the most foggy and restless metropolitan spleen imaginable, so “Ring Road Reprise”, which lasts just over two minutes, stands out clearly as a psychic immersion into the neurosis of a motorist in the throes of nocturnal disorientation. In “Moebius Loop” it is the sensation of the “whirlpool” that reigns supreme, an obstruction that surrounds – and not only metaphorically – the social body of the whole town. “Gordian Knot” displays a continuous drone, at times metallic, bubbling softly, a sequence that at other times also sounds like rain. “Shepherd Tone” is a missed acceleration, a grammelot, a language of mechanical fantasy for which the intonation and the typical cadences are those of a liminal space. The last track of the album, which enriches the already remarkable Gruenrekorder catalog, is “Ring Cycles”, a score that includes recordings of the electromagnetic fields that surround and emanate from the ring road, driven by the traffic that passes above in an aggregation of psychogeographic sounds and suggestions.