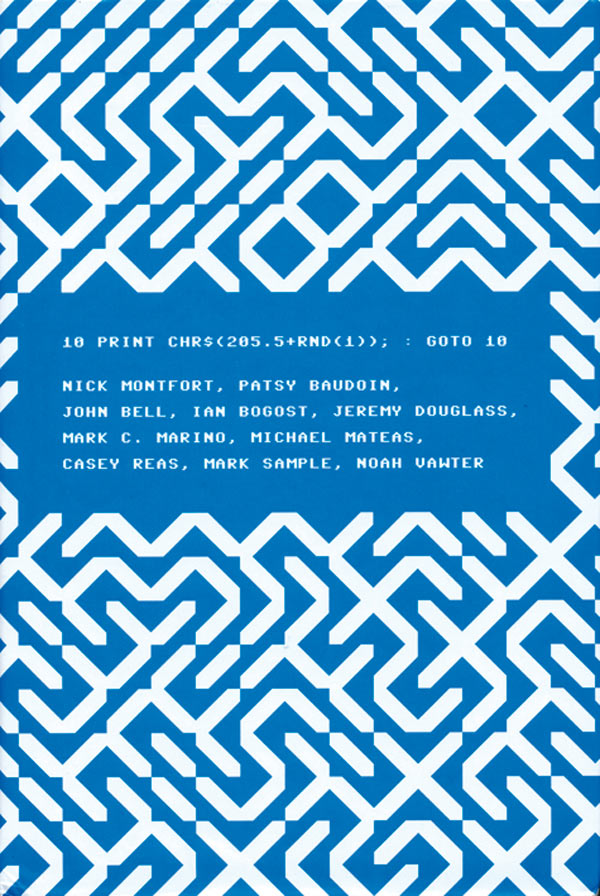 The culture of code has been investigated in innovative publications, but this books aims to embed concepts related to code even in the process of being made, incarnating exemplary software processes. Despite being written by ten different authors (N.Montfort, P.Baudoin, J.Bell, I.Bogost, J.Douglass, M.C.Marino, M.Mateas, C.Reas, M.Sample, N.Vawter), it’s not an anthology of texts, but a unique collaboratively written text, mirroring the approach of many of today’s most socially important software. Furthermore it ambitiously begins by critically “generating” content from its title. The title is multifaceted: a line of code, indeed an infinite loop, indefinitely generating a graphic maze through ascii characters. But it’s also a symbolic program dating back in the eighties, written in the most popular programming language of the time – BASIC – and used in the most popular microcomputer, the Commodore 64. The book unfolds the backstory of the role computing and programming has played in culture, discussing randomness, grids, generativity and languages (just to name a few), reflecting different aspects of software culture. The writing style aims to be consistent with the concepts, “maintaining the same pace… continues running until interrupted”, and in this sense it becomes a conceptual book. Finally, the Casey Reas design excellently balances design and technical conventions, including the use of a second printed color – the “Commodore blue” – and is licensed under Creative Commons.