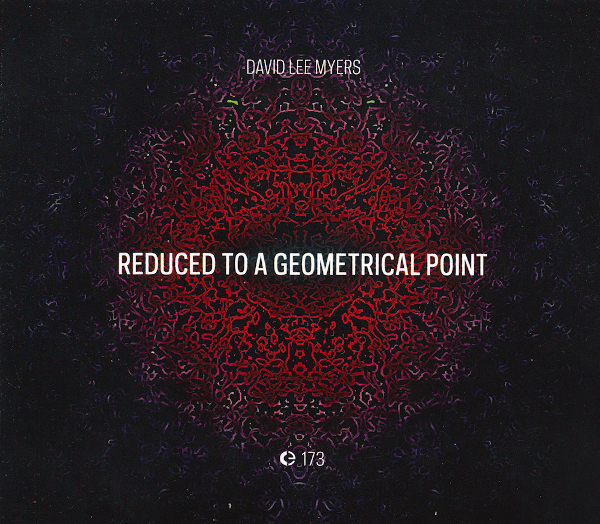 David Lee Myers, the composer of Reduced To A Geometrical Point, is quick to point out that he is not really a fan of “music for meditation”, although he has noticed that some audio constructions seem to encourage a position of staying in the moment. It is the simple truth of being “reduced to a geometric point in front of God”, a quote that harks back to the ideas of Frithjof Schuon, who in turn does not refer to a particular Judeo-Christian vision of a supreme being, but rather to any creative force of the universe, energy – in another word – which must necessarily exist. The sound and visual artist, resident in New York for many years, presents four pieces here, ranging in length from 12 to 18 minutes. He is an experienced experimentalist, with more than thirty releases to his name for labels such as Crónica, Starkland, Generator, ReR, Line, Silent, Pogus, RRRecords and Staalplaat, to name but a few. The overall effect of Myers’ hypnotic plots hark back to the tradition of North American repetitive minimalism, to that search for a pure sound that does not include a “before” and an “after” and that shuns overly rigid musical structures. The author thus clearly focuses on the “here and now”, on the simple event modelled in execution, on the essential vibrations and frequencies which, even if grandiose in some passages, never give the feeling of searching for deliberate elegiac models. It is a mass of sounds that moves slowly and the references to non-Western music are unavoidable, as in “GEO 1 Laurentia”, a special undulating and hoarse rāga, or in “GEO 2 Pannotia”, a spiritual track that seems to loop on itself. “GEO 3 Gondwana” is the darkest, most astral and at the same time most introverted track, before ending with “GEO 4 Pangaea”, again in the apotheosis of feedback, oscillator sets and multiprocessing. David Lee Myers once worked under the name Arcane Device and played as a guitarist in a rock band in the sixties. Later he was fascinated by feedback techniques, Frippertronics and the ambient music of Brian Eno. Here its application has reached an extreme rarefaction, marrying elegant minimalism with a contemplative approach.