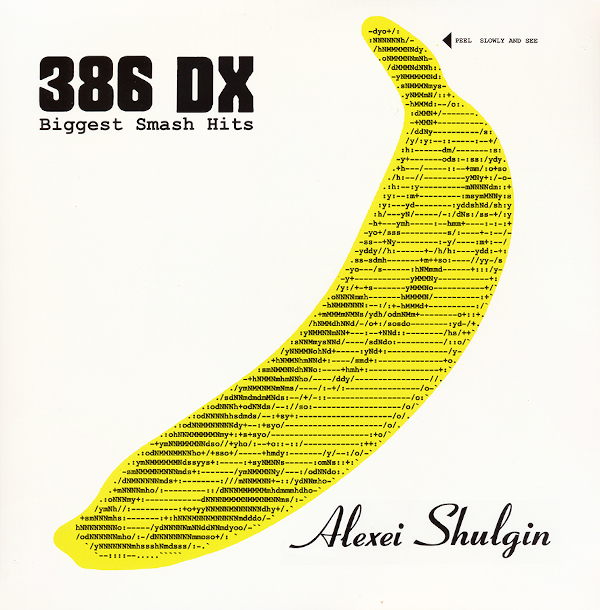 386 DX is one of Alexei Shulgin’s most acclaimed releases. Shulgin is one of the most well-known net artists of the 2000s and the author of seminal works and historical texts including Introduction to net.art with Natalie Bookchin. He is also a well-known contributor to the nettime mailing list since its inception. In 2002, after the release of the album “The Best of” for Staalplaat, Shulgin was interviewed in Neural # 19 *. “386 DX”, whose name derives from the acronym of Intel’s cheapest PC processors had the aim of presenting pop classics sung through text-to-speech software and orchestrated with the modest MIDI capabilities of the time. The result, thanks to Shulgin’s mastery, was surprisingly effective, both as an album and as an installation. The first, in addition to the audible tracks, had a data track (CD-ROM) that contained an unauthorised version of Windows 3.1 equipped with software to make the computer process the data of the songs in real time. The cover rendered Sticky Fingers by the Rolling Stones through ASCII characters. In the installation version, however, (“Busking 386 DX”, presented at Transmediale 2002), a 386 DX pc was left to busk on a street corner, along with a container to collect donations. Even the live version, with Shulgin alone in the guise of an electro pop star, worked well. The immediacy of the pop elements alongside the Lo-Fi aesthetics earned the title of the “world’s first cyberpunk band”, both because it was able to perform independently on the street and because it was able to involve the public in the performance. “Biggest Smash Hits” comes twenty years after its first release, on vinyl instead of the original CD, with a selection of tracks that almost bleed into one another. The exception are some tracks that are discarded and replaced by samples from “Black Dog” by Led Zeppelin, “Rape Me “By Nirvana, “Enter Sandman” by Metallica and “Пригородный Блюз” by the Russian band Zoopark, included in the Russian version of the first CD, released by the artist in 2002. The quotes multiply when you look at the new cover, which echoes one of the best known ever, that of “The Velvet Underground & Nico”. It’s amazing to listen to the songs after all this time, appreciating the technical and conceptual ability with which they were reconstructed. The uncertain and metallic voice of the machine remains so, and yet the release also seems to make enormous and programmatically useless efforts to equalize the various original tracks. The age of hardware arouses an empathy that completely transcends its potential and, through collective musical memory, makes us sympathetic to its transparent vocal obsolescence.