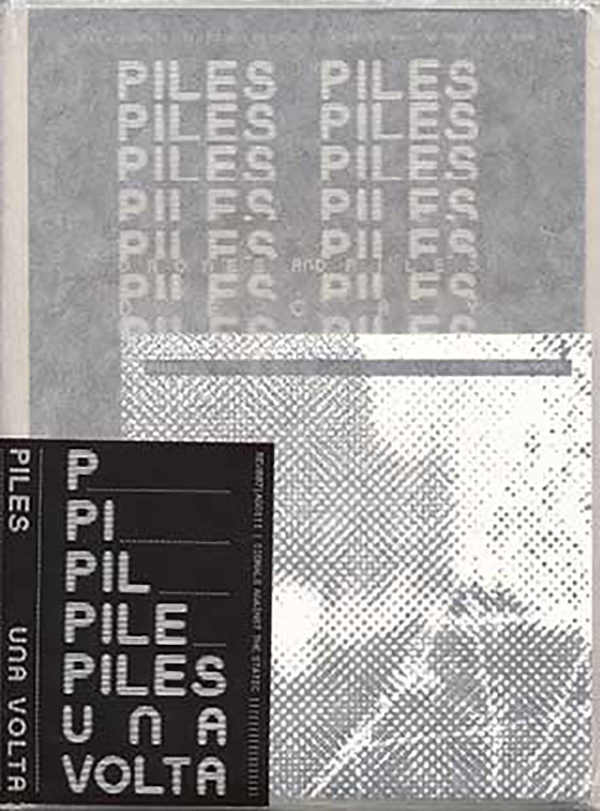 Performing under the moniker Piles are the percussionists and improvisers Guigou Chevenier, Anthony Laguerre and Michel Deltruc. The French musicians work between Nancy and Avignone in France and are now releasing the album Una Volta, an all-instrumental collection including eight compositions for drums. The CD includes an austere but engaging booklet designed by Bas Mantel, a summary featuring stylized typography based on a combination of font and small iterated images, alternated with one or two pages of graphic processing. All of the elements are in black and white, reminding one of a visual style typical of Pop, or, if you prefer, Punk culture.
The ensemble was established in 1985 when Chevenier gave life to Les Batteries, another collective where there were many left-field experimental rock drummers, but also other musical instruments. This rock inclination is confirmed already in the first track, “Drones and Piles”, a track full of sibilant, aggressive buzzes, a recombination of different music ages with a deep art rock character. The rhythms are quite raw and the improvisational influences very basic. As such, it’s not so easy to recognize a precise structure, so we move on to the next compositions, some longer than the first one, with “Kraut and Piles” and “Materials in US” both lasting over nine minutes. The noise elements are not foregrounded and the raw grain of the acoustic drums with some bare electronics altogether make for a bewildering effect. In our opinion, the trio produces the most interesting performances in the longer tracks, where they better develop an aesthetic strategy whose nature is abstract, disconnected and experimental. Among the others, we pick “Chambred’echo”, the most atmospheric, clinking and energetic track. The final composition, “Marie”, is also longer than nine minutes. It starts with some dark drones, light drumming, rolls and beats, always at a controlled volume. The result is a constant unresolved tension. Una Volta bewilders the listener with its estranging continuum, the organised alternation of rhythmic elements and the uninhibited, direct and far from abstract approach (something that’s not always easy to find in the audio-art scenarios).