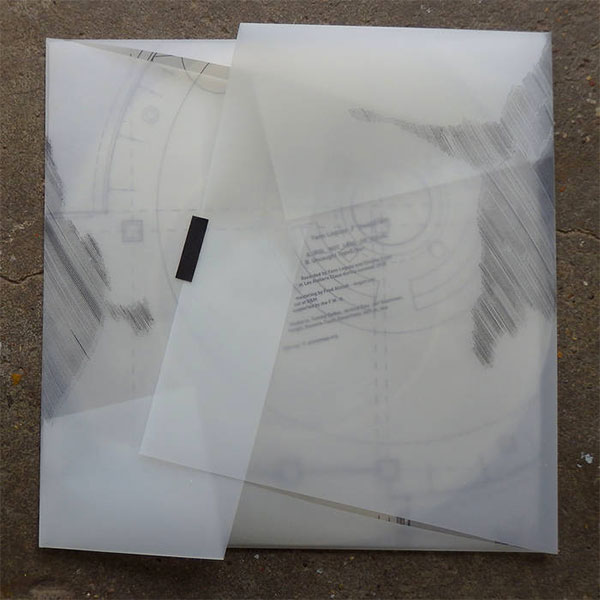 The last work of Yann Leguay, Headcrash, comes to us under the form of a limited edition – only 300 copies – produced by Vlek Data, a Belgian label active since 2010, from whom this work is the 25th release. The package is appealing and conceptual at the same time and was designed by Leguay and Dimitri Runkkari. It’s a clear vinyl with a custom typeprinted cover and a sleeve printed on polystyrene tracing paper. Inside the box we find some inserts, which are building plans found in a cellar at HS63 in Zennestraat (Brussels). Headcrash is the final result of a series of live performances called “Quad Core “, where the French sound artist set some up some broken hard-drives to work as miniature turntables, by the manipulation of sounds due an open source software with an Arduino hardware. It’s not the first time Leguay has played these forms of turntablism. Actually, this was the object of a lot of his projects, as the three-arm turntable or the inverted movements turntable. With the former projects, he used to play some contradictory but at the same time prolific deconstructions. In this case, the deconstructions are apparently even more dense, due to modulation of elements such as rhythm breakdowns, jumps and winces, lugs and estranging frequencies. The sounds and the sounds backgrounds are the same thing to Yann Leguay. Due to this reason maybe, many people are not completely wrong to define him as a media saboteur, rather than a musician, a creative based on a border land in-between festivals and art exhibitions, installations and performances. “Sound is my medium of preference”, the artists says, “but I consider it more a means to analyze or understand what is going on around us”, a raw material that then it is being developed into some contents with different aesthetical-speculative themes. The result is some avant-garde and often self-referential experimentations, whose take the status of artistic objects in their final release, is an editorial product associated with sound expressions. In Leguay’s works some elements are always recurring: the dissipation, the energy, the control of infinitesimal aspects or, on the other way, the absolute non-control. Laguay is only apparently a difficult artist, actually his interpretation performances can attract non-specialized audiences too.