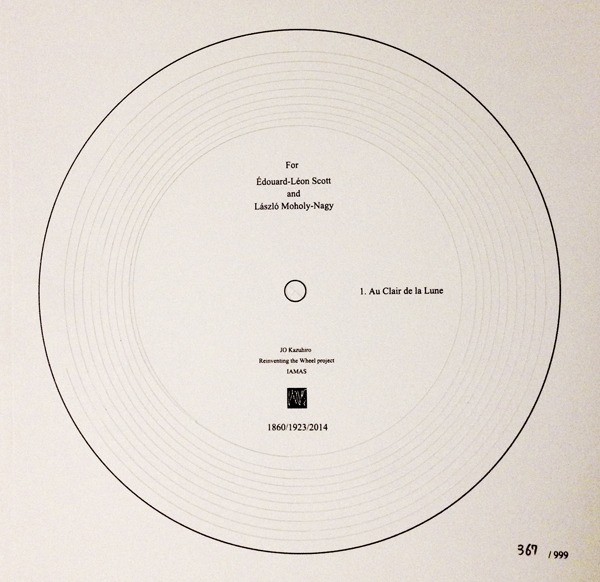 “I have suggested to change the gramophone from a reproductive instrument to a productive one, so that on a record without prior acoustic information, the acoustic information, the acoustic phenomenon itself originates by engraving the necessary Ritchriftreihen (etched grooves).” (Moholy-Nagy, 1923)
In 1923 László Bauhaus master Moholy-Nagy made the above proposal to produce a record without inputting acoustic information. At the time, it was just a provocative idea. However, after 9 decades, we have realized the idea with the help of mature vinyl audio recording technology and current personal fabrication tools.
In this work, instead of using the vibrations of original sound, we computationally generate a waveform with a conventional graphics application (Adobe Illustrator). The waveform represents a french folk song “Au Clair de la Lune” which was also known as the oldest recorded sound by Édouard-Léon Scott in 1960. By engraving the waveform through a laser cutter on a wood, a vinyl cutter on a paper, or a hand and a cutter on this page, you could generate an acoustic phenomenon of the french song through your own record player.