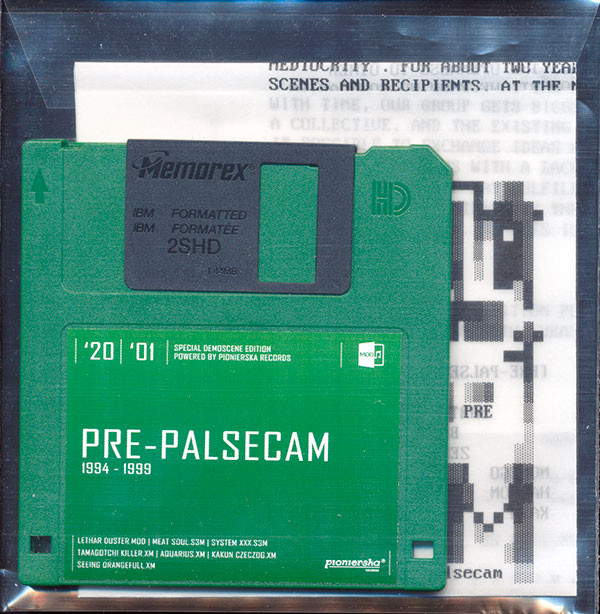 Pionierska is a micro label founded in 2014 whose releases are mainly on 3.5″ floppy disks and magnetic tape audio cassettes. The aesthetic adopted is immediately clear, to be absolutely outside any commercial ambition, to favour forgotten formats, objects or rejected media, to give space to subcultures and good DIY practices. Today it’s difficult to speak about demoscene, the Assembly festival in Finland still exists, and still awards prizes and honours in various categories to more virtuous coders, but it was a very different entity in the nineties, when those cultural fields were still active, and this archive is a vivid testimony. The electronics presented – very direct and essential in their basic but at the same time artificial structures – has ‘Kill Mediocrity’ as its motto. The interesting aspects of Palsecam’s project lies in the exchange of ideas and cooperation occurring at various levels. How not to get excited in the face of the acid sequences in Bartesek’s “Lethar Duster”, a powerful 24 kB Rave ride? How not to be surprised by the insistent beats of Blaze & Zenial’s “Meat Soul”, alternated with a nostalgic and killer riff? Zenial alone in “System XXX” is more ethereal, while Bartesek in “Tamagotchi Killer” is cheerful and uninhibited, referencing the sounds usually used in children’s games. Nonego’s “Aquarius” and Haloon’s “Kakun Czeczog” are the two most musical pieces of the selection, almost an elegant fusion, difficult to condense into such limited resources. The album ends with “Seeing Orangefull” by Kain, with more fractured rhythms, with airy carpets in the background and many different “instruments” that peek out when listening. In short, among archaic personal computers, Amigas, modules and tracked music, Palsecam reminds us of a period where there was a new conception of art and where computer programmers expanded the limits of these fundamental technologies.