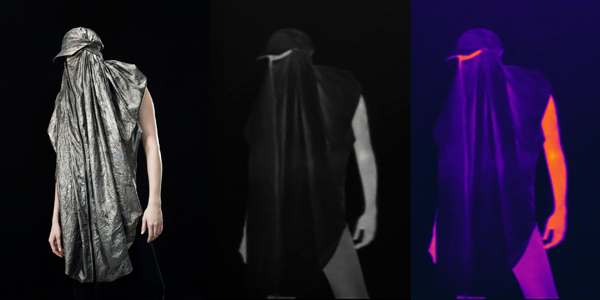 Despite fashion often being considered superficial, limited to windows and glossy magazines, it must also be recognized that it has always been a forerunner and spokesman for certain cultural trends and evolutions of the generational history of human society. We could say that fashion reflects the civilization in which it is immersed, indeed, from which it emerges. On the hot topic of invasion of privacy, the American fashion designer Adam Harvey has presented the first anti-spy collection in London, entitled Stealth Wear. The clothes, made in collaboration with his colleague Johanna Bloomfield, are lightweight, breathable and thanks to the highly metallic fibers that compose them, they function as a shield against the thermal sensors of drones, small unmanned aircraft, and other high-tech agents in the growing surveillance arena. The idea might also be funny were it not for the controversy sparked in many countries over the increasingly widespread use of domestic unarmed drones for surveillance purposes. Although the drones prove useful for tracing explosives, solving kidnappings, organizing relief efforts following natural disasters or crashes, the spate of accidents in foreign anti-terrorist missions that have sometimes involved the loss of innocent lives has brought strong condemnation from privacy advocates and has split public opinion in two. Adam Harvey, who has previously dealt with privacy issues in other works such as CV Dazzle, is back with this mini-collection, partly inspired by Muslim dress. On display are an anti-drone burqa, scarf and hoodie, a t-shirt that blocks X-rays and Off Pocket a mobile phone case that absorbs signal, making it impossible to locate. Although the intention of the artist is to demonstrate the fallibility of blind faith in technology, there may be some who believe that these clothes, if used improperly, might help to facilitate certain forms of illegality.
Benedetta Sabatini